La Pescadora, Mexico – WCA Hosted Fly Fishing Trip Report: In late October, WorldCast Anglers hosted its second official trip at La Pescadora Lodge in Punta Allen, Mexico. La Pescadora is wonderful, intimate lodge that opened its doors in 2013 and has quickly become a very popular destination, especially with Permit fanatics. With one of the best guide staffs in the region and a genuine home-like atmosphere, WorldCast is enthusiastic about this blossoming operation and our growing relationship. 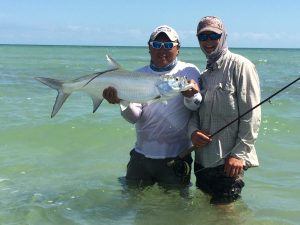 WorldCast Anglers hosted the first annual Black Tail Invitational at La Pescadora in August, bringing together some of the most devoted Permit fishermen in the world and the Yucatan’s very best fishing guides from multiple Yucatan based lodges. The results were astounding with 43 total permit caught in 5 days of fishing by 10 anglers. With such impressive results, it’s no wonder who decided to join our fall hosted trip back to La Pescadora. The trip was entirely filled by current or former guides and managers of WorldCast. Mike Dawes hosted Head of Outfitting CG Sipe, Assistant Outfitting Manager Robb Scott, Camp Manager Time Brune and esteemed WorldCast Fishing Guides Leigh Gardner, Brian Johnson, Zack Barrett and Jacob Ginter. It was quickly labelled as the “Bros Trip” to Mexico with Kenny Powers quotes mentioned on a daily basis leading up to the trip.

Bonefish are plentiful at La Pescadora!

You would think by late October that most fly fishing guides would be burnt out on the idea of chasing fish. Following a 5 month period of literal devotion to catching trout, including multiple 20+ day periods without a day off, it would be assumed that most of these guys would prefer to do anything except fish. Not with this group. The passion and excitement shared by everyone was palpable as the trout bums of Wyoming and Idaho chased Permit, Tarpon, Bonefish and Snook for 6 days in the Caribbean. 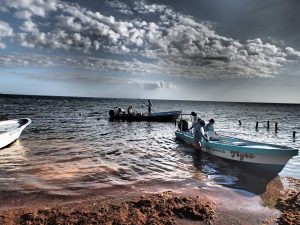 As anyone who has fished enough can attest, sometimes the weather doesn’t cooperate with even the best laid plans. Prior to the “Bros Trip”, the southern Yucatan received over a weeks worth of non-stop rainfall. This much freshwater is typically devastating to Permit fishing. Thankfully, Ascension Bay has abundantly healthy populations of Tarpon, Snook and Bonefish who didn’t seem to be as snobby about the recent weather. By the end of the trip, the group landed hundreds of Bonefish, dozens of Tarpon and Snook and even a couple Permit who decided their hunger was too much to ignore. 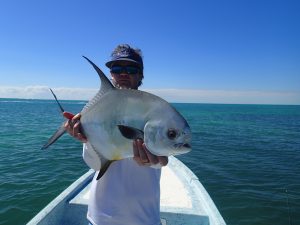 The amazing food, congenial management and staff and wonderfully pleasant aura of Punta Allen sealed the deal. When the group returned, it was pronounced the “best trip of all time”  by every member and the lodge was promptly booked for the same week next year with the same anglers. The obsession and passion that fly fishing creates in certain individuals cannot be exemplified better as these exhausted seasonal professionals wanted nothing more than to continue chasing fish and even under less than ideal conditions had the time of their lives.

WCA’s Rob Scott with a back country La Pescadora Tarpon