The Fly Fishing Film Tour 2022 has arrived and WorldCast Anglers has two viewings for your angling pleasure! Mark your calendars for March 20th at High Point Cider in Victor, ID and March 21st at the Center for the Arts in Jackson, WY! Details are listed below. Just like in years past, the Fly Fishing Film Tour has selected a top-notch film lineup with stories that span the globe! These films are sure to get you fired up for the season ahead. As always, we’re going to have some awesome fly fishing raffle prizes and all proceeds will be donated to local non-profits and conservation organizations.

The Fly Fishing Film Tour is back and returning to theaters this season! This year’s 16th annual show is chock-full of the best films are sure to feed your fishing addiction. From Costa Rica to Australia to Louisiana and beyond, you can expect to see exciting action and amazing stories of anglers from across the globe. Join us for this year’s F3T and get excited to grab a rod and hit the water this upcoming season. 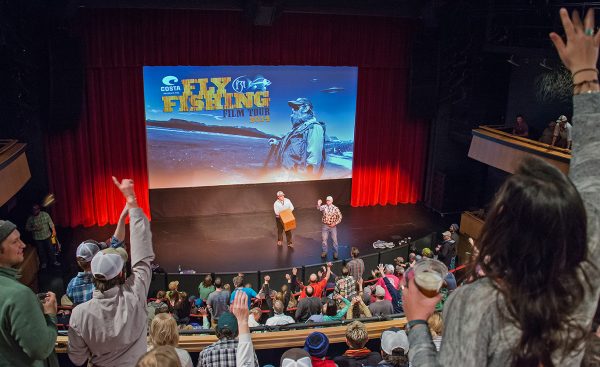 Center for the Arts, Jackson WY

The Legend of Casa Mar

The Legend of Casa Mar details the history of one of the most legendary tarpon fisheries on planet earth. The film dances back and forth from past to present with a breathtaking interview from fly fishing legend Peter Gorinsky, IGFA archive footage, and supporting footage taken during the films production in 2021. This film follows anglers Jesse Males, Mark Evans, Micah Baly and Thony Nunez as they uncover what the jungle has now been hiding for decades. Vibes of jungle exploration mixed with stunning tarpon action make this film run full-throttle from start to finish.

Directed by Eric Braker and Andrew Braker. Produced by the Braker Brothers.

Katie Fiedler Anderson has been a fly fishing guide in Vail, Colorado for over a decade, but things started to change when she became pregnant with her daughter. The short film, “Phoenix”, tells a story of passion, as Katie and her husband take a leap of faith in order to inspire their 4-year-old daughter to chase her dreams no matter what the obstacle.

Everyone loves Dan. He’s friendly, hardworking, and loves a good laugh. But Dan has a problem. Fish don’t love Dan. So he journeys from the marshes of Louisiana to the jungle coast of Colombia, to see if South American tuna will show him some decency and respect.

No one ever said it would be easy. Well, actually they did, but that was their mistake.

The Cobia In the Chesapeake Bay don’t eat a fly so much as they inspect it at high speed. A fish that is known in many places as an easy quarry and a tasty meal, is anything but in the Chesapeake (a water system where it has grown wary from all the attention, especially from conventional anglers). The result is a fish that tests Blane Chocklett’s mettle, patience and skill in the mid-atlantic sun.

The Cobia, a shark-meets-catfish, has become a target for fly anglers when it floats up in the water column. Captains Tyler Nonn and Jason Barham trade thoughts on the state of the fishery and strategies on how to intercept them before they move to offshore habitat in Fall. What ensues is a reminder that no matter how much you know, you’ve always got more to learn.

Inspired by a shrinking biomass and an uncertain future, Black Salmon shines a light on the wary Cobia’s issues today. As decreasing numbers and warming waters lead the fish north into unregulated regions, as we all try to keep up.

For the past two years Australians have been limited to travel within their own country. This is not all bad news when you realise the diversity of fishing options in Australian waters. In early 2021, Josh Hutchins, of Aussie Fly Fisher, and film-maker, Kane Chenoweth, set off to one of Australia’s most remote regions in search of clean water, tropical vibes and big fish – the Cocos Keeling Islands.

Despite schools of bonefish and the odd-GT distraction, we had a primary goal for the trip: a Bumphead Parrotfish. We’d seen it done in the Seychelles, and we wanted to catch one in our home waters. Let the mission begin…

Family has always been an important part of the steelheader’s journey. From all walks of life, no angler is entirely self-taught. Whether from your life partner, your parents, your friends, your guides, your guests, or even your community, it takes a family to make an angler.

Missy MacDonald is no exception. As the owner and operator of The Steelhead House, an intimate steelhead lodge nestled on the shores of the mighty Skeena river, Missy and her partner Darren have been cultivating their steelhead family for many years. You may not be connected through blood, but if you’re in pursuit of wild fish with a fly rod, you’re family to them. And this family isn’t gonna stop growing anytime soon.

Both Missy and Darren are accomplished anglers and stewards of both the resource and the culture. To them, it’s one big family. And in this family, everyone is brought together by common ground.

In a time when travel was banned, adventure pretty much nonexistent, four obsessed anglers put their heads together to fill that empty void in their soul, they call fishing. Three sheets to the wind, full bore ahead as we set sail for 21 days to explore the endless atolls and flats of Belize, from the most famous to the untouched and unknown.

Not being welcome on land we’ll travel north to south by sailboat, foot, and paddle board with fly rods in our hands. Led by legendary Belizean spear fisherman and Captain Deadhshot Danny, our ragtag crew of obsessed anglers head out for an adventure of a lifetime.

Like all great odysseys, the unknown surprises and obstacles create the adventure. With new species on the board and good times under the belt, life on a boat has never felt more connected to the rhythm of the ocean than now.

Join Matt Devlin of Western Pictures on a very personal journey back home from Montana to Maryland in search of a hatch that occurs once every seventeen years!

Dropped thousands of miles from home in a land where the sun never sets, a group of anglers set out to explore the magical North Country that is Swedish Laplands. During this journey, these anglers encounter some of the truest wild left on the planet, while also embarking on an introspective journey to redefine their own reasons for fishing. Join along on the uncertain road of trial, tribulation, and treasures discovered with sights set Northbound. Presented by Orvis and Swedish Lapland Tourism.

About the Fly Fishing Film Tour:

The 16th annual Fly Fishing Film Tour is back with a selection of films that are sure to get you fired up. From Costa Rica to Australia to Louisiana and beyond, catch the action and amazing stories of anglers from across the globe. For more, go to flyfilmtour.com.