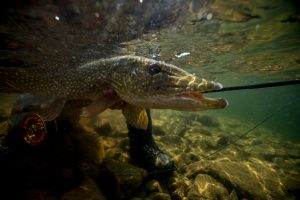 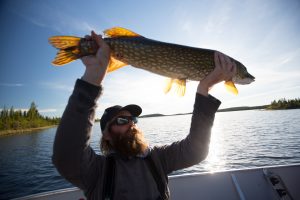 “Pike take you to beautiful places that are different than those inhabited by trout–backwoods, weedy corners of lakes and big sloughs off rivers. There’s lots of mystery in every cast, not knowing if you’re targeting a 25- or 45-inch fish,” explains Jeff. “The fish themselves are a must-see–the teeth, the attitude, the mean look, long body, twisting power.” 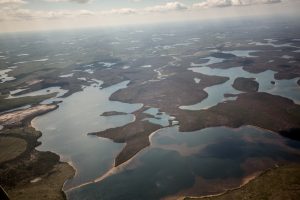 Here, surrounded by literally, hundreds of lakes and waterways, you’ll have the opportunity to fish for some of the largest pike on the planet. Saskatchewan specimens are particularly impressive, growing slowly in this cold climate, about one inch annually. Basically, if you land a big pike and measure age in inches, you’re landing an ancient fish. The Saskatchewan record measured at 55 inches. At Selwyn Lake, 53 inches is the record. 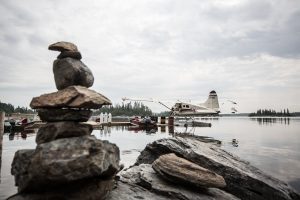 This very remote fly in/ fly out lodge is located on Selwyn lake, a 135,000 acre piece of water that spans across the Saskatchewan and Northwest Territories border and is host to over 24 feeder streams and two out-flowing rivers that run into the Athabasca watershed and onwards to the Arctic Ocean. The main lodge is located 3.5 miles south of Canada’s 60th parallel in Saskatchewan on Common Island with two third’s of its fishable waters located in the Northwest territories. 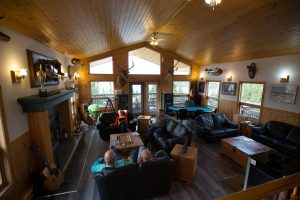 The lodge at Selwyn Lake combines modern technology and comforts with a rural and rustic atmosphere that seems only appropriate for a northern pike fishing trip. The main lodge houses the dining area, kitchen, bar, lounge and outdoor patio. Adjacent to the lodge are ten private guest rooms with private bathroom facilities. A handcut log boardwalk connects the buildings and lakeside dock to tie everything together.

Selwyn Lake offers premier trophy fishing for three unique species: Northern Pike, Lake Trout and Arctic Grayling. Most anglers travel to Selwyn to pursue the infamous Northern Pike because there might not be a better place in the world to do so. Fish above 50 inches are caught every year with 100+ fish days being not uncommon under the right conditions. Serious Pike fishermen will expect to catch 1-2 trophy sized fish on a daily basis. If guests are interested in switching it up, they can go deep and chase the monster Lake Trout that commonly exceed 40 inches or wade up into the rivers and pursue Arctic Grayling up to 19 inches. One of the coolest fishing offerings at Selwyn are the daily fly out excursions. Each day, anglers can pay extra to fly out and fish no less than five other destinations that typically see less than 20 anglers per year! 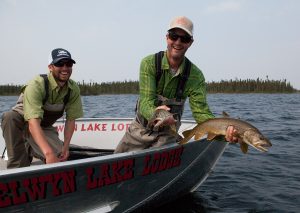 This unique week is limited in availability–open to only 12 anglers–and will focus on fishing for trophy northern pike, lake trout and Arctic grayling against the stunning taiga backdrop of northern Saskatchewan, a mere stone’s throw from the Northwest Territories.

Email us for more information! 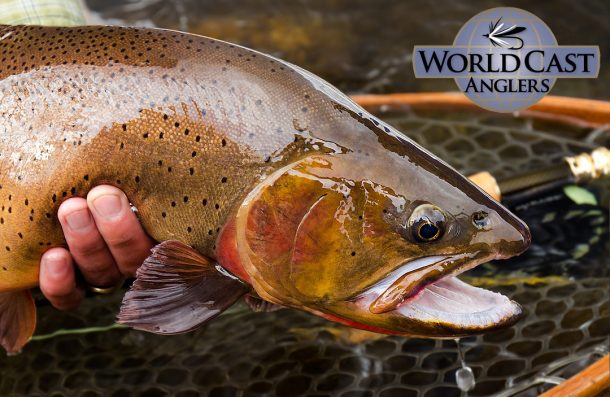 At WorldCast Anglers, we are committed to unsurpassed angling service and world class fly fishing adventures. During this time of unprecedented demand for all our outfitting services, we are dedicated to continuing that service to all our customers on and off the water. Please enter your email address below to stay in touch with us regarding booking your reservation(s) for future seasons as well as all our guided trip offerings, fly shop news, destination travel opportunities and classes and clinics.

You have Successfully Subscribed!