We sat down on the WCA Fly Shop front porch with a couple cold ones with WCA Head Guide, husband, father, previous Marta Stewart TV show studio manager and Alta Boys guitar player, Vance Freed.  We asked him some questions about guiding, fishing, crazy travels and dream fishing locations.  Vance Freed began his fly fishing odyssey at the age of 10 in his hometown of Trumbull, CT, where he would rise before dawn to pursue the resident sunfish in the neighborhood pond.  More than 20 years later, Vance has naturally undergone the metamorphosis that would leave guiding as his most obvious and beloved livelihood.  Vance lives in Driggs, ID with his wife Greer, 1 year old daughter, Reese and Captain the dog. 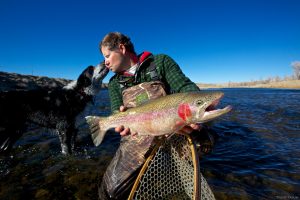 How did you end up in the Jackson Hole/Teton Valley region?

I first came to the Jackson Hole area in the spring of 2003.

I was living in Connecticut working as the Television Studio Manager for the Martha Stewart Show.  My friend, Matt Kelly, had introduced me to now WCA Head Guide AJ Sanders.  AJ recommended that I attend the WorldCast Anglers Western Rivers Guide School, so I completed the school in the spring of 2003.  In May of 2004, Martha Stewart was found guilty of securities fraud and I was out of a job.  WorldCast Anglers called me and offered me a guide position and I accepted.  My first trip was on July 9th, 2004 and I had very little time in transition from one career to the next.

What’s one piece of gear that you can’t live without on a daily basis as a guide?

To be honest, I need everything; my boat, boat bag, rods, reels, line, flies, leaders, tippet, and coolers to make everyday a successful day for my clients on the water.  There are too many items to list.  All my gear and equipment are in concert with each other and working together at all times.  I have to have everything every day.

What’s your favorite fishery in the Jackson Hole/Teton Valley area and why? 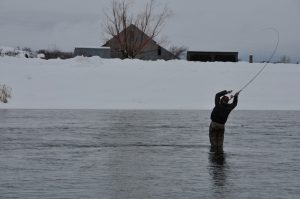 I love the lower Henry’s Fork from Ora to Fun Farm the best out of most of the water in our region.  I don’t get to fish much on my own during the peak fishing season as I guide all spring, summer and fall.  So, the days that I do get to fish are mostly in the winter and I always head to the Vernon area of the Henry’s Fork.  It is the best.  There are lots of big fish there with lots of opportunities to target them.

What new piece of gear are you really excited about for the 2014 fishing season?

My new Adipose Flow Skiff.  I have rowed Clackacraft drift boats in all different shapes and sizes for the past 10 years.  High-side, low-side, bench seat, 16ft, 15ft, you name it, they are great boats.  However, my new boat is 15’4” which is a perfect size and the layout of the boat is very advantageous for guiding as you can walk around the entire boat.  It draws very little water that helps me get into tight to reach places.  It is also the most comfortable boat that I have found for sitting down and fishing.  As our clientele age, they need more attention and care.  This boat helps my clients withstand long days on the water.

If we handed you a free plane ticket to fish anywhere in the world, where would it be, and why?

New Zealand, hands down.  I have never been there and always wanted to visit New Zealand and fish.  Sight casting to abnormally large trout with dries; there is nothing that could beat it!

What are the similarities in your current career compared to your career as a Television Studio Manager for the Martha Stewart show?

To be honest, not much!  However, one similarity would be the pressure of the job.  We were always under pressure working with the director and producer to change sets, move walls, style out a set and fill it with props.  Guiding pressure is similar as I have to produce a solid product and experience to succeed.  The pressure with Martha Stewart was allocated to multiple departments where the pressure of guiding is individually based.  With guiding, it’s just me.

The first time we met you, you were explaining a detailed method of nymphing lady bug patterns on Flat Creek.  You seem to have an interest in “out of the box” and unique fishing techniques and fly patterns, tell us about your thought process when nymphing.

To start, the lady bug rig worked once or twice to be exact.  I do think that you can catch fish on things that are novel.  I feel that fish want to test their potential and current food sources.  I’ve watched fish on multiple occasions mouth grass, weeds and other non-traditional food sources to test those items and see if those items are edible.  Trout have no choice but to open their mouth.  If a trout had arms and hands, they would grab those items and look at them but they don’t; they have to put their mouth on it.  I had a trout spit up a shoe lace one time while I was guiding on the North Platte.  That fish must have thought it was a worm or something.  I’ve been known to nymph hornets and beetles during summer months and we’ll leave it at that!

What’s your take on fluorocarbon vs mono.  Are there times when you prefer one over the other?

Fluorocarbon can make a difference!

Fluorocarbon leader and tippet material is a true advancement in technology for all anglers.  The fish don’t see it as well and I feel that my clients land 30%-40% more fish when I am using fluorocarbon.  Clients can make mistakes when fighting fish and those mistakes are usually absorbed by the fluorocarbon material thus we are able to land more fish.  It sinks (which makes it perfect for nymphing and droppers), it is more abrasion resistant and less subject to coiling as it is more rigid.  The only time I use monofilament is when fishing small dries and emergers.

You were the second American individual granted permission to be a guide in the Seychelles in the middle of the Indian Ocean.  Tell us about one of your most memorable (craziest) days of fishing while you were there.

In 2004, I was walking a 70 year old client and his wife out to a place we called the “wrecks.”  This client had some serious heart conditions and had undergone a triple bypass surgery a couple years before, so we were moving quite slow.  The “wrecks” were a place where some Japanese Tuna Trollers wrecked in the 70’s and were left to rot; however, they had created a lot of structure that fish liked to hold close to and congregate around.  Grouper, Snapper, Permit, Bonefish, GTs, barracudas and other trevally species called it home.  Suddenly, my walkie talkie began to buzz with a message from Tam Tam (the mother ship).  It was an emergency – there was a Tsunami coming and we needed to get back to the boat and mother ship immediately.  We began walking back to the boat and noticed that the water was now around my waist instead of the normal shin height.  I tried to be as calming as possible.  My clients observed me grabbing glimpses of the horizon line and they asked me what they would do if the Tsunami hit us.  I have plenty of guide tricks but I have no idea how to stop a humungous wall of water.  We finally got back to the boat and mother ship safely.  I was thinking about how lucky I was to be the second American guide in the Seychelles but how unlucky I was about to be to perish in a huge Tsunami.  This was the same Tsunami that killed over 230,000 people in the Indonesia, Sri Lanka, Thailand and India areas.  Luckily, the Seychelles are an atoll in deep water where the depth could absorb the force of the wave and water.

You spend over 300 days a year on the water.  What is one piece of advice for those interested in starting a career as a fly fishing guide.

Work as hard as you can when you can as the opportunity for work is limited.

My advice would be: work as hard as you can as the window for work is limited.  I push myself to work almost every day possible as I know that sometime it will be November, the fishing will be over, and the work will not be available.  I couldn’t maintain this pace 52 weeks a year but I can for most of the fishing season.  Winter is always around the corner and I will have plenty of down time.  I have worked hard to put together 8 months of guiding a year between the North Platte, South Fork, Henry’s Fork and Snake River regions and to stay as busy as possible.