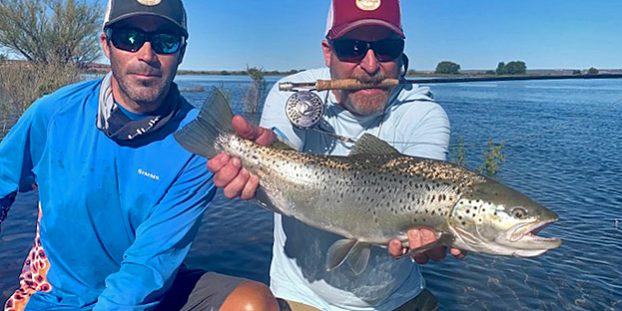 Patagonia On The Fly Trip Report: Our trip to Argentina this January was greatly anticipated after a long delay due to Covid-19. Argentina opened its borders to vaccinated travelers in November, and when January arrived everyone in the group made it to San Martin as planned. This small mountain town in Northern Patagonia is headquarters for our host company, Patagonia on the Fly, and is located near many of the amazing rivers we looked forward to fishing on our 7 day adventure. Nico Schinocca, guide and owner-operator of POF, met the group when we arrived in San Martin with his staff of guides. After introductions and a delicious empanada, we loaded our luggage into the guide trucks and were off. 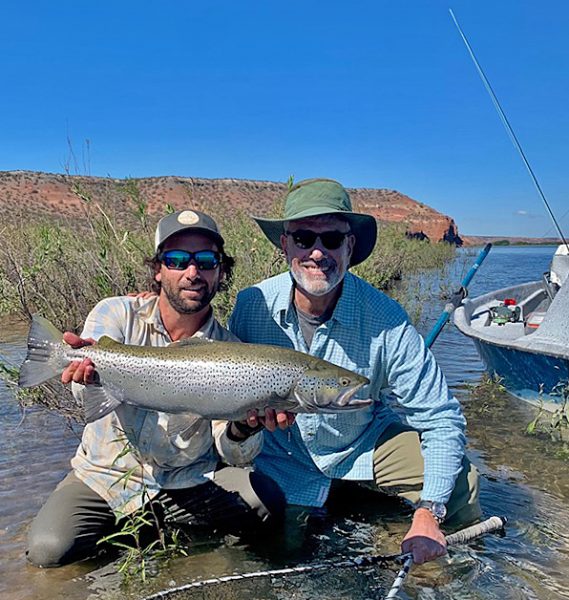 Our first mission this trip would take us out into the wild of Patagonia, to the remote and mighty Limay River. This is the only tail water river in the area, and is large in size, reminding me of the South Fork of the Snake River back home in Idaho. Due to the heat wave at the time, flows on the Limay were big in order to generate enough hydro power to cool the overheated communities to the east. I was worried this might have a negative effect on the fishing, as it often does back home, but as it turned out my fears were unfounded. 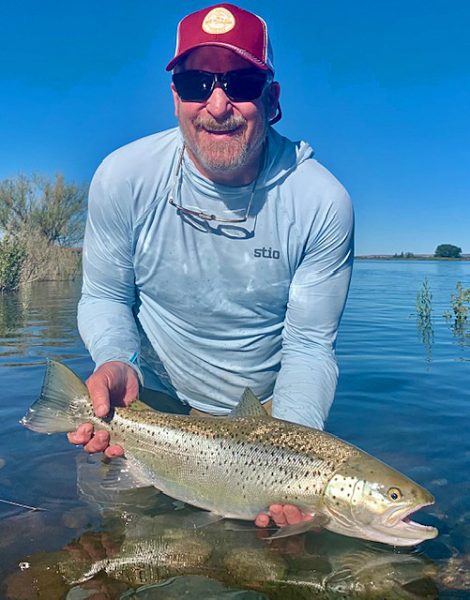 Our first day on the Limay was here, and we split our 4 boats into 2 groups and headed out to float 2 different sections. After a short drive from the lodge we arrived at the put in. The only other person we saw all day was a gaucho on horseback riding near the put in. He seemed surprised to see us. Our guide Gabby launched the boat right after Nico had launched to guide Bob and Marianne. Equipped with radios to communicate between boats on the long section of the Limay, we were finally fishing. 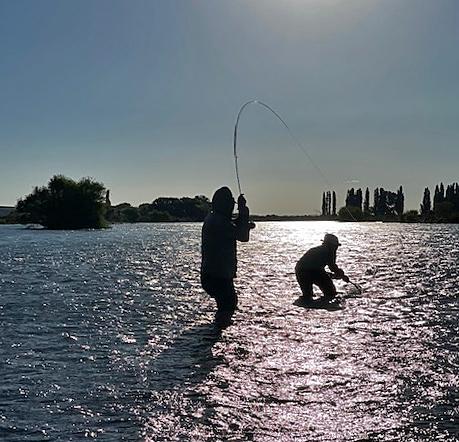 The anticipation that builds up on a trip like this is palpable, and I couldn’t be happier to be back on the Limay. We back-rowed upstream a bit and began rigging, 6 and 7 wt rods, 9 ft  3x leaders and a big foam dry fly to start. The day was bright and the water crystal clear. Literally within the first 15 minutes on the water I heard a loud “Whoa!” from Bob on the other boat, still within earshot. Moments later the crackle of Nico’s voice on the radio, speaking in Spanish to Gabby excitedly…Gabby looked at me and said “re-rig a 2x leader, Bob just landed a 29 inch brown!” Not an hour into the fishing and a monster brown to hand on the other boat, incredible! My heart pounded in my chest as I fumbled to re-rig. 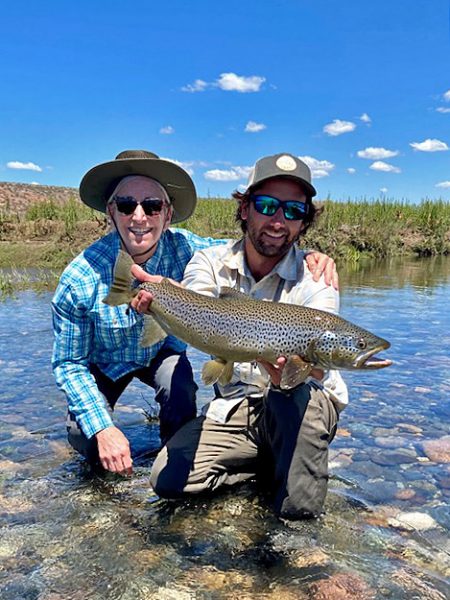 The tactics used to entice these 8-12 lb beasts on the Limay is unique. Nico had shown me how to do it on our last trip a few years before. Double haul, if you can, into the middle of the river with your foam fly on floating line and mend downstream. This causes the fly to skate across the surface, often making a spray of its own as you strip to arc the drift down and across the current. Long casts cover more territory, and the explosive strikes from angry browns will haunt your dreams. It is a physically demanding way to fish, as big wind is not uncommon on the Limay. Last time down some of the anglers used this technique to land trophy browns, but I was only able to see a few dark shadows trailing my skating fly when I tried it before. This time I was committed, and determined to make it work. I put my nose to the grind stone, inspired by Bobs early success, and got after it. The crackle of the radio again, not an hour had past since Bobs trophy. Marianne had landed a 27 inch brown! I was ecstatic, beside myself with excitement. It was on. 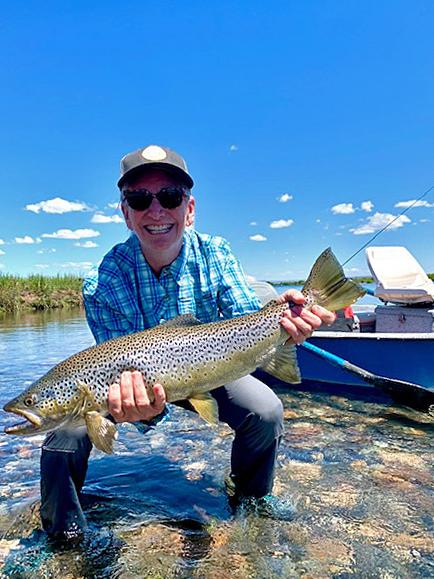 All that day I fished with all I had. Despite some escorts and a few drive by’s from big fish, success eluded me. As is often the case in Argentina, we fished long into the evening.  Though I was tired and a little discouraged 7 hrs into the float, I kept pressing. I made a long cast, and was momentarily distracted by a large raptor flying through my sight line. What bird is that, I began to ask Gabby, but before he could answer he shouted SET!! I looked down and picked up, but it was too late. Gabby was beside himself. Didn’t you see him? He breached and come down on your fly!  Foiled. Damn bird. Angrily, I cast again and with laser like focus mended and stripped. Suddenly, the huge white chin of an enormous fish came straight out of the water and engulfed my fly. I set and the battle was on. We anchored on the bank and jumped out of the boat to fight the fish from shore. Man, was this fish strong. The evening of Day 1, and I landed my personal best 26 inch brown.  Amazing.  Gabby said the fish I had missed was even bigger. Just like a fishing guide, always keeping me humble.

We fished different sections on the Limay for 2 more days, and everyone involved had many encounters with these large migratory browns that call the Limay home.  Sometimes the angler won, sometimes the fish won, but an amazing time was had by all. I did manage to top my day one fish on day three, landing a silver beast that gulped a circus peanut on a dead drift at the head of a beautiful pool. Great bookends for this visit to the Limay. Next it was on to the beautiful River House on the Chimehuin, our home base for the rest of the trip. 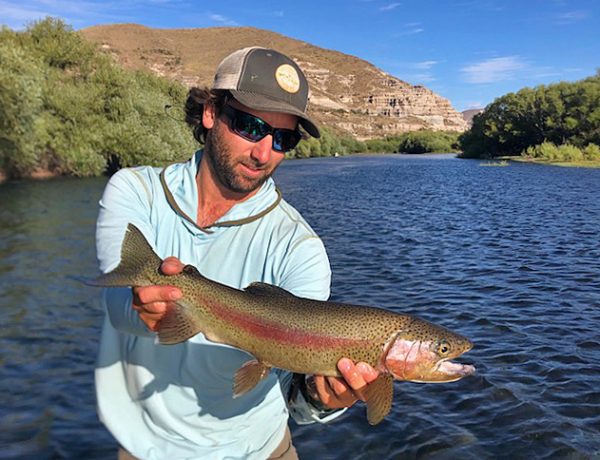 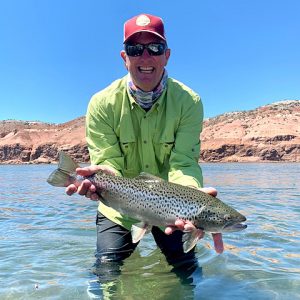 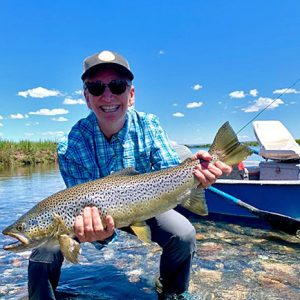 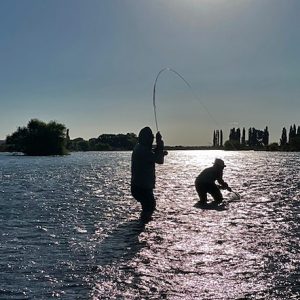 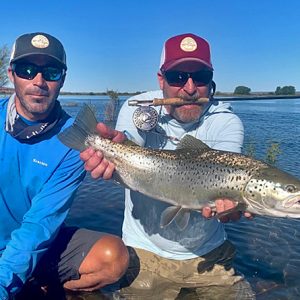 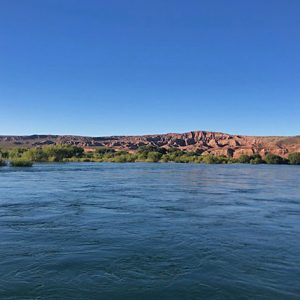 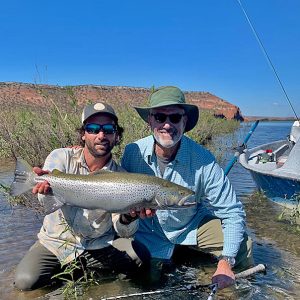 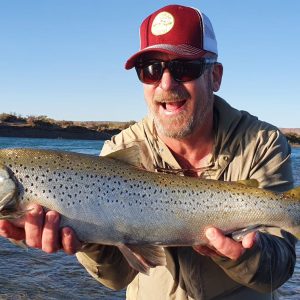 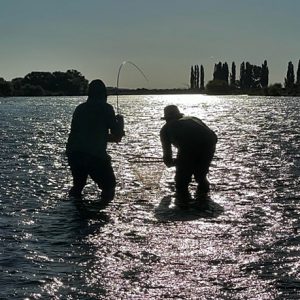 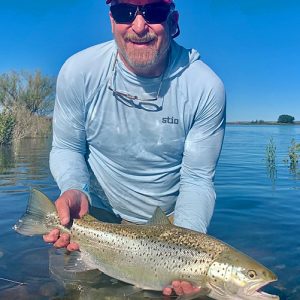 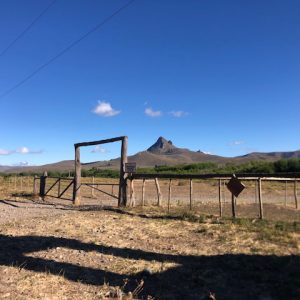 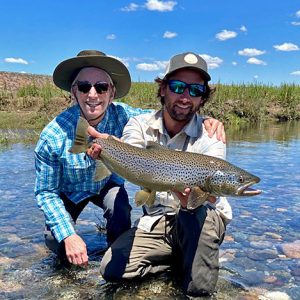