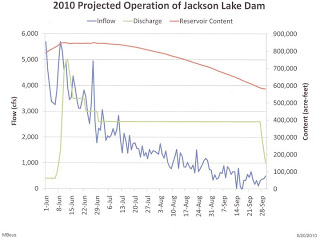 In spite of a light snowpack, a cool spring has delayed runoff and will result in stronger-than-expected water flows in June, according to the U.S. Bureau of Reclamation. The agency operates the Jackson Lake Dam in Grand Teton National Park, which is the largest single influence on river flows.

Bureau operation manager Mike Beus presented his forecast for release from the dam at a public meeting Thursday night at the Antler Inn on Pearl Avenue.

The bureau projects releases will peak at 5,000 cubic feet per second June 13. The flow will be gradually scaled back to 2,800 cfs that will flow from the end of June through late September. A graph of the projected discharge shows an even flow through July and August, with a rapid decline at the end of September.

This year’s release forecast is not far off from last year’s figures. Even with an above-average snowpack last year, the release from the dam peaked around 5,800 cfs and leveled out close to 2,000 cfs for the summer.

Beus said the water content of the snowpack in the upper Snake River basin is at just 64 percent of average but a cooler-than-average April and early May have delayed snowmelt.

“Our snowmelt has been extremely delayed by the cold weather we’ve been having,” Beus said. “On April 1, it didn’t look good. But we’ll have more water because of the late runoff, and rain on the Snake River plain the last few weeks has been good, too.”

Rain on the plain means Idaho irrigators, who own water rights in the reservoir behind the dam, won’t be immediately calling for higher flows for their crops. In addition to the Jackson Lake Dam, irrigators have Palisades Reservoir, American Falls and other impoundments from which to draw.

Currently, the bureau is releasing about 400 cfs of water — its normal winter-level flow. This flow will continue until about June 8.

This is not welcomed news for float trip companies, which may be navigating slow, shallow waters for at least a few more weeks, depending on the runoff in tributaries.

Maintenance on the dam’s gates, scheduled for mid- to late September, will require the bureau to draw the lake level down to enable construction workers to reach the gates.

Jackson Lake Dam is on the Snake River near Moran. The dam maintains the water level above the lake’s natural elevation for irrigation and flood control.