Water Study to Look at more than Teton Dam 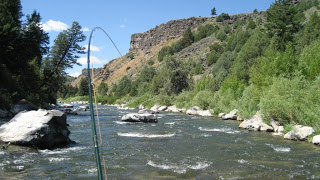 “From the Rexburg Standard Journal”

Several stakeholders are supporting the broadened focus of a federal water supply study that will look at more than the Teton River and rebuilding the failed Teton Dam.

“We’re supportive of that,” Fremont Madison Irrigation Director Dale Swensen says of the broadened scope of the study.

Friends of the Teton River Executive Director Lyn Benjamin also praised the new scope of the study and the work of Trout Unlimited, American Rivers and Idaho Rivers United in encouraging the broader look at water supply issues in the Henry’s Fork basin.

“I recognize that farmers I work with need water, and they recognize that fish need water,” Benjamin says in an e-mail concerning the topic. “Hopefully we’re going to do some decent science and some economic science to support the decisions that get made.”

“We applaud the BOR for launching a more thorough study of our water options,” says Kim Goodman Trotter of Trout Unlimited. “We look forward to collaborating with all stakeholders to find the best solutions for Idaho.”

Initially, the Idaho Legislature appropriated $400,000, to be matched with an equal amount by the BOR to do the study that would look at feasibilities of rebuilding the dam that spectacularly failed in 1976.

Bureau of Reclamation Pacific Northwest Regional Activities Manager Robert Schattin explained last week at a Henry’s Fork Watershed Council meeting how the study was expanded to include the whole Henry’s Fork basin, including the Teton River.

The Henry’s Fork study will focus on conservation and changes in water management, as well as water storage alternatives.