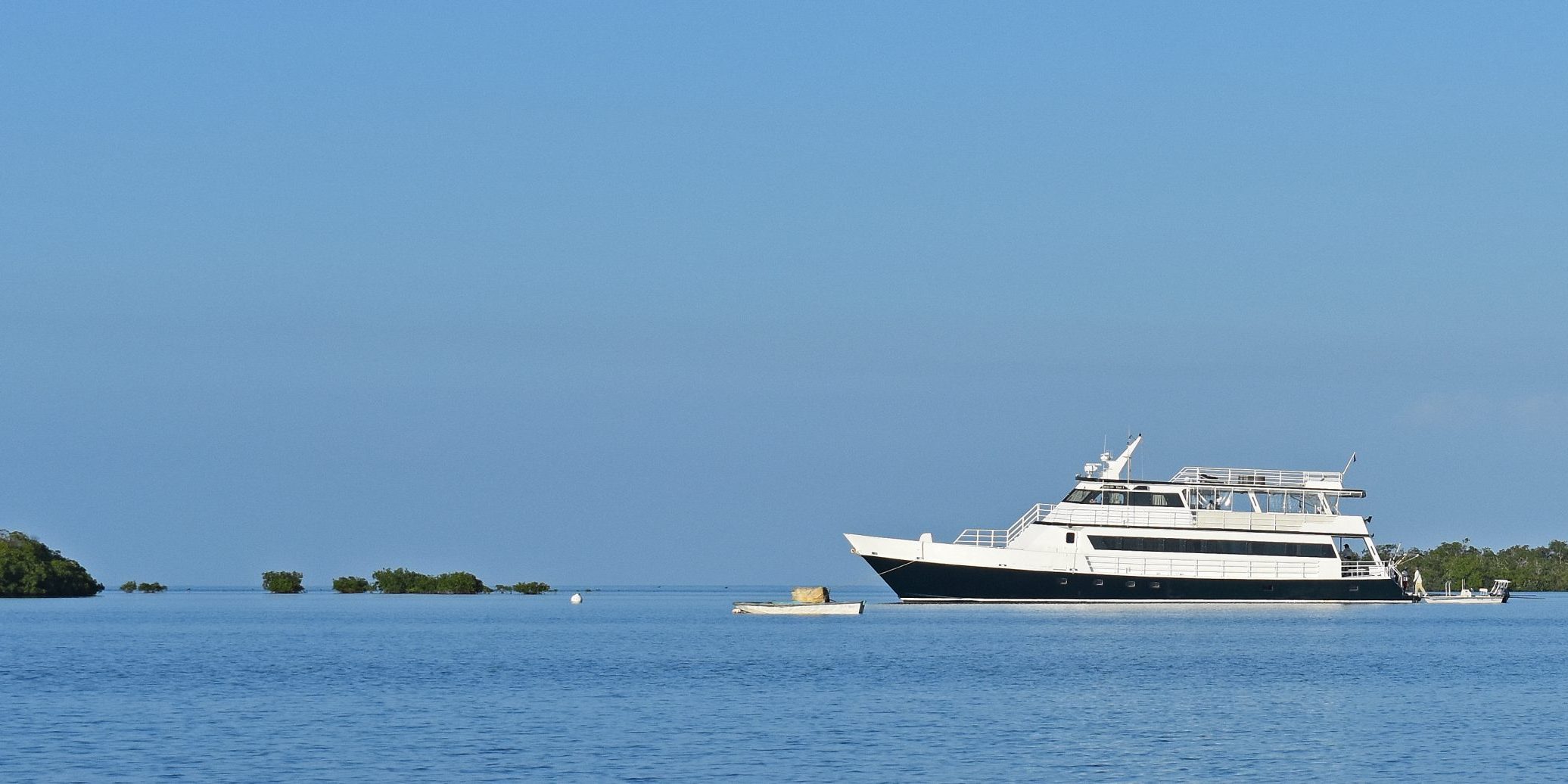 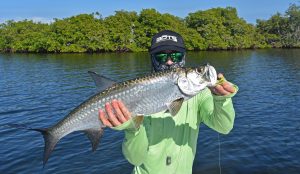 This was pretty cool. Our crew was a party of six; all six of us being from the same small rural town in Michigan! My dad introduced all of us to fly fishing as kids growing up. The exception was my dad’s best friend Jeff, who likely taught my dad, Gil, how to fish! At this point, stoke was all time! After some hotel supper, we headed to bed at a fairly reasonable hour, as our flight to Cuba departed early the next morning.

Travel to Cuba as an American is a little more involved than your average fishing trip. It was a bit intimidating. Just hoping that we had everything in order, our fingers were crossed that we would actually make it to our hunting grounds. Big thanks to Chris Littauer, WCA COO/Destination Travel Manager, for getting us totally dialed in! Travel was perfectly smooth. Upon exiting the Camaguey International Airport, we were greeted by representatives from Avalon, the outfit we would be spending the next week with at Jardines de la Reina. From the airport we had a 2.5 hour private bus ride to the port town of Jucaro where our vessel awaited us. The bus ride was super comfortable and took more like 3.5 hours with beverage, bathroom and cigar stops. As we hopped off the bus, things started to get really exciting!

Our whole crew for the week met us and help with luggage and “supplies” we had acquired during the bus ride. We boarded the Avalon 1 mothership and were shown to our rooms. This boat was awesome! Due to the size of our group, each angler had their own room and bathroom. The rooms were well air conditioned and clean, complete with fans, big windows and showers. It was really quite something. After a real quick unpacking, we all met up on the deck for drinks and lunch. 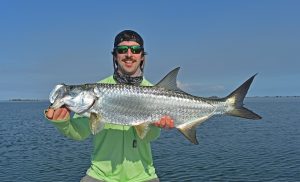 The boat crew presented us with a helpful and informative orientation slideshow, since we didn’t know exactly where we were headed. From Jucaro, we traveled 52 miles over 7 hours on our 100 ft. yacht to Jardines de la Reina. JDR is a marine preserve open only to catch and release fly fishing with Avalon and treated much like a national park. It is a series of beautiful islands surrounded by crystal clear water south of the Cuban mainland. The area is larger than the entire Florida keys and we were to be the only anglers there all week! Imagine being the only three skiffs in the Keys for a whole week?! After lunch and orientation, we set about getting rigged for our fishing on the upper deck of the boat. Dolphins followed us much of the way as we strung rods, twisted leaders, asked the guides about flies and commenced the tackle chatter in full. We arrived in JDR just before sunset and sat down for an incredible meal.

The food deserves it’s own paragraph. Chef Jose was on fire! For breakfast we were served eggs or omelets cooked to order with fruit, pastries, coffee and fresh juice. Lunch was buffet style consisting of seafood, pork, chicken, hard boiled eggs, rice and fruit. As our fishing days ended around five o’clock, our awesome stewardess, senorita Gleybita, had cocktails and pizza ready to enjoy! We would then make the 30ft. jump into the water off the top of the boat and snorkel for a while, then recount the days fishing. Just before dinner each night our crew would go over tackle needs and we would shop through the awesome WCA provided flies, leaders and tippets! The guides really appreciated this service as well. Chef Jose’s dinner each night was out of this world! Long story short, the seafood was incredible. We ate all kinds of fish. We bought a lifetime supply of lobster for a bottle of rum, which Jose prepared in all kinds of fascinating ways. Then there would be a fancy dessert! There was absolutely no going hungry with Chef Jose as our man, he was a real stud. 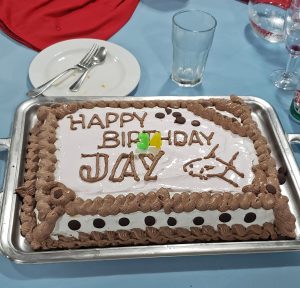 A non fishing highlight over the week was my high-school buddy Jay’s birthday party! Our friends secretly put this all together. At lunch, we all met up on a beautiful beach where we’d all been hammering bonefish for the past hour together. Chef Jose had a fire ripping and was grilling live lobsters over an open flame. There was cold beer and Cuban music blasting; it was awesome. In addition Jay landed his first tarpon about an hour earlier, a nice 30 pounder or so. I asked Jay if this would make his top ten birthdays of all time? The answer was “yes”! In addition, Jose baked a unbelievable giant birthday cake complete with a frosting drawn permit for dessert. This was just one of many times our crew went above and beyond during the course of our trip! 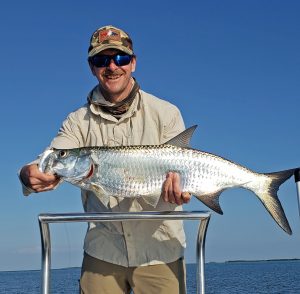 As for the fishing, I really couldn’t have a better report. JDR is the most pristine, healthy and beautiful saltwater fishery I have yet laid eyes on. It is incredibly vast and the volume of aquatic life crawling around was absolutely nuts! Our group consisted of primarily first time saltwater fly fisherman and our first order of business was to go bonefishing. I bet that within two hours, everyone had caught enough bonefish that they were ready to move on! The bonefishing was spectacular! We experienced everything: gigantic schools of nice fish, small groups and solitary big fish. Doubling up and landing two at a time became par for the course in our skiffs! 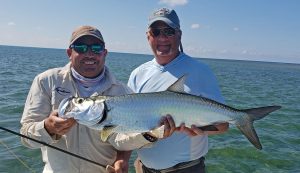 The guides fish of choice in JDR was definitely tarpon. I can’t blame them. The numbers of fish matched with average size of the fish and water clarity made for just a stunning combination. We did everything from blind fishing deeper channels with intermediate sinking lines to roping fish out of a foot of water. At times one angler would be casting to tarpon while the other was casting to a nice bonefish! The quality as well as quantity of nice shots for tarpon was really impressive. I think the average size of the resident tarpon to be right around 25 pounds, though there were certainly fish two to three times that size mixed in. The challenge of feeding, hooking and landing these awesome creatures kept our fairly inexperienced group fully engaged for the entirety of our trip!

In regards to the permit fishing; little time was dedicated to these mysterious beasts. In that limited time, I was very impressed by what little I did see. Some very respectable fish were interested but not fully sold on my offerings. From what I gathered from our guides, when the winds and tides are favorable, the shots at nice permit can be numerous! I fully believe it! Out of ten or so fish that I cast to, about all of them were in that 20-30 pound range! When I go back, if the guides are feeling the permit vibes, I will be more than happy to comply. 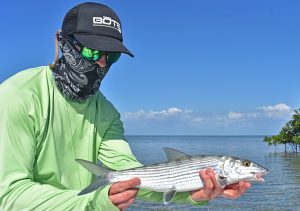 The bycatch in JDR was incredibly entertaining! Barracuda, big snapper of all variety and large hard fighting jacks were encountered on each boat daily. It was an absolute blast! 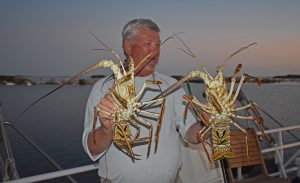 All in all, I could not have been more impressed by our week on the Avalon 1 in Jardines de la Reina! The weather was superb, the guides were tremendous and the staff on the boat were fantastic. By the end of the week, we all felt like family! That is the sure sign of a great trip. As such, I’m going back next January for round two and have got the exact same crew assembled. I cannot wait to spend more time with our new cuban amigos. They could not have been more hospitable and friendly and made for one of the most memorable fishing trips I’ve experienced in my angling career!”

Contact WorldCast Anglers via EMAIL or at 800.654.0676 for more information about this trip.